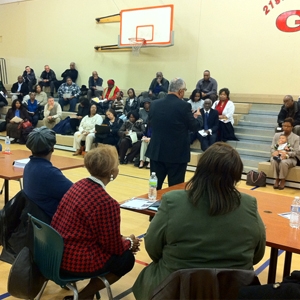 Back in 1997, Lanika Brooks thought it made sense to drop out of West Side High School in Gary to get a job and earn money. Brooks, now 34, said her parents tried their best to dissuade her. She quit in the middle of her senior year.

Brooks, now the mother of five children, is yearning for the high school diploma she once spurned. After working a series of dead-end cashier jobs, she’s learned how far a paycheck goes. At a Salvation Army job fair last year, someone told her about a new charter school aimed at dropouts like herself.

Brooks, who’s now become an inspiration to her own children who attend school in Merrillville, where they live with her grandmother, is laser-focused on getting a diploma in June.

“Without a high school education, you’re limiting yourself and losing out on better jobs. Now, my kids say, ‘If mom can do it, we can,'” she told the Post-Tribune.

Since August, she’s been spending evenings and Saturdays at the Gary Middle College, one of a handful of dropout recovery schools in Indiana. Operated by the Indianapolis-based GEO Foundation, the school shares space with the 21st Century Charter School, 556 Washington St.

Ball State University, the sponsor of Gary Middle College’s charter, stunned the state’s education community recently when it announced it wouldn’t renew seven charters, including two in Gary. One of those schools, Charter School of the Dunes, is in the midst of building a $13 million school.

Teasley said when 21st Century Charter School received a five-year renewal from Ball State last week, he pushed ahead on construction of a $13 million school of its own at 8th Avenue and Washington Street. “We waited for the renewal before we sold bonds. We are cautious,” Teasley said.

He said he hopes the bond sale closes in six weeks and meanwhile, the school has all its permits from the city and construction bids are out. The new school will house 21st Century Charter high school students by day and GMC students at night.

On a cold January night, the school is buzzing with new faces. New students have swelled the enrollment to 220, and officials say they have a waiting list that reaches 800. Gary Middle College has a four-week orientation process to ease students into the program, hopefully ensuring they’ll stick around.

Some students reacted angrily to the move, saying they’d miss the nurturing Joiner, who seemed to understand the obstacles they’re trying to overcome. Kevin Teasley, president and founder of the Indianapolis-based Greater Educational Opportunities Foundation, which operates the school, said the dismissal of Joiner was necessary to move the school forward. He wouldn’t say much more.

Teasley, who visited the school Thursday to meet with students said only a handful voiced concerns about Joiner, a former principal at Pierce Middle School in Gary. Teasley said students largely talked about meals, school hours, credits and the prom. “Each student was committed to continuing their education and graduating from GMC.”

The city of Gary has an unemployment rate of about 13 percent and its schools lose nearly half of their high school kids to the streets. It’s a vicious cycle that drains services and tax dollars from a community that can’t afford to fall behind. And it’s led to a proliferation of charter schools in the city.

Charter schools like GMC and New Vistas Charter School in Portage, are trying to reconnect this population of largely 16-to-24-years to school.

Eyeing Gary’s ripe population of dropouts, two other dropout recovery schools considered applying for charters from the Indiana School Board last year, but withdrew their applications for now.

Brooks and Reginald Wright Jr., 20, of Gary, are on track to be part of Gary Middle College’s first graduating class on June 10.

Wright dropped out of Roosevelt High in 2010, just six credits shy of graduation. After time away, he’s reacclimating to a different school environment.

“It’s awesome. You work at your own pace or outside of school,” said Wright who lives with his mother and younger sister.

He has dreams now of becoming an architect and playing football at Marion College.

Graduates can earn dual credit from Ivy Tech State College and, if they stick with it, earn a free associate’s degree.

Tamara Tucker, 16, is one of the few traditional school-age students at Gary Middle College.

She attended West Gary Lighthouse Charter School, but likes the ability to move ahead on her own in her studies.

The curriculum for GMC students is online-based. Each student works at a laptop and connects to the program via the Internet when they’re at home.

They take all their tests online and teachers can monitor their individual progress.

Tucker breezed through her first semester work faster than any other student. Tucker hopes to graduate in 2014, a year ahead of her traditional program.

“I leave school and I’m home by 9:15 p.m. And I study till about 2 a.m. I like nights better.” Tucker also holds down a part-time morning job at Burger King in Griffith.

Tucker’s father opposed her move to Gary Middle College, where she would be surrounded by older adults. “I told him I’d make him proud,” said Tucker. “I’ve made friends and can have more mature discussions. Academically, I can move at my own pace.”

Teaching is a different art at GMC, where they’re called “learning facilitators” because they rarely command a classroom in front of a blackboard.

This “blended learning” approach allows students to take tests online while being guided by certified teachers. The curriculum is aligned with the National Core Curriculum standards.

All of GMC’s teachers are part-timers.

“A lot of students come in defeated, they’ve failed before. The trick is to let them know they can be successful,” he said.

“I had to strategically work hard to address the variations they have.”

Scott holds general meetings with each class once a week, allowing students to interact and help each other along. He can also go online and check their progress in real time.

Albeit a dropout recovery school, Gary Middle College does have dropouts of its own. Attendance here is non-negotiable, students must be there 95 percent of the year.

To bolster self-esteem, the school hosts celebrations regularly where accomplishments like attendance and effort are commended.

The school also is planning a prom and its first commencement ceremony.

For now, students like Brooks are hoping it’s their lifeline. At least, it’s served up one good lesson.

“This shows me that I want to finish school and get my education,” said Brooks’s 14-year-old daughter, Dejah, an eighth-grader at Pierce Middle School. “She studies hard. It makes me want to study harder.”