Menu
HOME  /  About Us  /  Media Center  /  Latest News  /  GEO in the News  /  GARY POST-TRIBUNE: Student earns dual degrees, a first for both charter school, his family 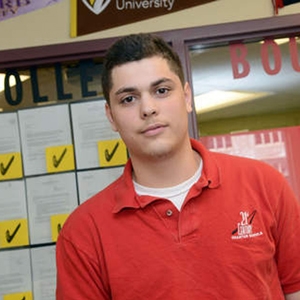 High school senior Vincent Pena will receive a college degree nearly a month before he picks up his diploma from 21st Century Charter High School. Pena didn’t set out to be trend setter, but he’s proud it worked out that way.

Pena will become the first member of his family to earn a college degree Saturday when he receives an associate degree in general studies from Ivy Tech Northwest at its 11 a.m. commencement at the Genesis Center. He’ll also be the first student from 21st Century to receive an Ivy Tech degree.

He’ll get his high school diploma on June 3.

Pena gets all the credit for his hard work and determination, but it all began with a little luck.

He entered 21st Century Charter School in eighth grade after the school held a lottery for students because it had more applications than desks.

“Mother knows best,” Pena said of his mom, Janet Pena, who pushed for her son to enter the charter school because she was dissatisfied with his education from the Gary Community School Corp.

“He’s always been determined to get things done,” she said of her son, who’s the youngest of six children. “But I never expected this in a million years.”

Pena, whose father, Felipe Pena, lives in Chicago, will be saving his parents’ money when he enters Purdue University in West Lafayette for the fall term. Purdue has accepted 37 of the 60 credits he earned at Ivy Tech. Pena said he plans to study computer graphics engineering.

“That’s exactly why we started the school, that’s a big deal,” said Kevin Teasley, founder and CEO of the GEO Foundation that operates 21st Century and the Gary Middle College. “We get our kids exposed to college, and if they put their minds to it they can earn their associate degree on our dime.”

Principal Angela West said the school paid for Pena’s tuition at Ivy Tech, his books and transportation from the charter school to Ivy Tech’s Gary campus.

Since it opened, 21st Century and its sister school, Gary Middle College, have used budget money to pay for students to earn dual credit from Ivy Tech.

“This kid is getting an honors diploma and an associate degree on the same amount we’d spend on others who are just getting a diploma. But the issue is much more than just stretching the taxpayer dollar, it’s breaking the cycle of poverty.”

Pena said he’s always loved math and computers. He began his Ivy Tech exploration with a single class in microcomputers his sophomore year. That sparked his confidence.

“I got an A- and they felt I was capable of more classes,” Pena said. “I think he was apprehensive at first,” West said. “He was sitting in classes with people 30 and 40 years old, but he was confident he could do it.”

From there, he took beginning college courses in Spanish, English, history and math. His senior year, he took communications, economics, psychology, chemistry and math.

Because Pena was taking a full load at Ivy Tech, he didn’t take too many regular classes at 21st Century. He spent most of his time there studying in academic coordinator Catisha Coates’ office. “I knew this would give my college career a jump start,” said Pena who’s already received a full-ride scholarship from Purdue and leaves for “boot camp” there June 30.

This week, as he takes final exams at Ivy Tech, will also be his final week at 21st Century. West figures graduating from college is worth missing the last few weeks of high school.

“That was his get out of jail free card,” she said.