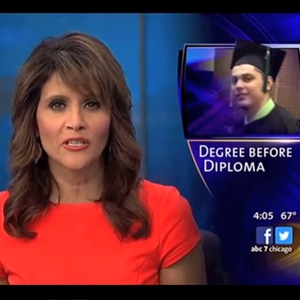 A high school senior is getting his high school diploma nearly a month after getting a college degree.

Vincent Pena, 18, will be receiving his high school diploma from 21st Century Charter School in Gary, Indiana. Last month he walked across the stage and received an associate degree from Ivy Tech. He is not the first to simultaneously take college classes while in high school. He is the first to complete 60 hours of college credit and graduate from both within weeks.

“It is amazing that I accomplished so much. It was a lot of struggle to get through those classes,” he said. “It was hard because i had no one to talk to. I had to sacrifice my social life.”

His older brother Joshua also studied at the high school for a dual degree but did not complete it.

“I felt proud of him. I know I couldn’t do it but am glad he did,” Joshua said.

Vincent’s mom Janet Pena says life has been a struggle, however, she is proud of both of her sons, especially Vincent from graduating from college and high school at the same time and she said she had to stay on him all the time to make sure he’s focused.

“It was something else seeing him walk down the aisle with the whole college prep, you know with ribbons on him, before he graduated high school, and it’s a great feeling,” she said.

“It’s amazing that Vinnie was able to get 60 college credits, what no one has done, but what people behind him are capable of doing,” Principal Angela West said.

Vincent has been awarded a full scholarship to Purdue University in West Lafayette where he will study computer technology and hopes to create video games.

“I was happy they gave it to me because I know we couldn’t afford it,” Vincent said.

Mom says raising two young men in Gary, Indiana, has been a challenge. However, a college education is something she always wanted. Now, college is not negotiable in her household. Starting in August, both of her sons will be away in school. Mom says when both boys graduate from college, she wants them to buy her a home and a car.