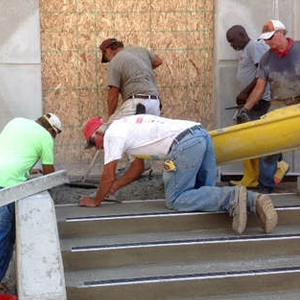 Students at the 21st Century Charter School and Gary Middle College begin the school year Tuesday, a little later than their peers but they’ll return to a freshly built $6.5 million 50,000-square-foot building. It will serve middle and high school students during the day and adults in the evening. The new school sits at 8th Avenue and Washington Street west of abandoned buildings with broken windows and weeds growing up the walls. That juxtaposition suits the school’s mission perfectly, says Kevin Teasley, CEO and founder of the Greater Educational Opportunities Foundation that operates the schools.

“Charters are a big part of Indianapolis’s renaissance and could be part of Gary’s,” he said. “It bugs me to see the Chicago skyline and property so close to Gary and yet the environment we find here … It doesn’t seem right.”

Northwest Indiana’s other new school is the Charter School of the Dunes, a $13 million two-story building on U.S. 20 and Old Hobart Road. It opened Aug. 12.

Now 10 years after the state’s first charter schools opened, charters face their own hurdles of balancing innovation with accountability and survival.

In the past four years, Tony Bennett, the state’s former school chief, and former Gov. Mitch Daniels presided over a GOP-friendly expansion of charter schools, charter authorizers and a voucher program with “choice” the popular buzzword.

Bennett’s relationship with one of those charters led to his resignation as Florida’s school chief. In August, Associated Press stories disclosed that Bennett authorized changes to Indiana’s grading formula after learning Christel House, a charter whose founder was a Bennett campaign contributor, had received a “C” grade. The formula changes boosted the school’s grade to an “A.”

Adding to the mix of charter uneasiness is recent criticism from an Indianapolis charter backer who contends schools whose charters have been revoked shouldn’t get new sponsors.

In January, Ball State University pulled the plug on its sponsorship of seven charters across the state for their lack of academic progress, including the Charter School of the Dunes and the LEAD College Preparatory Academy in Gary.

The jilted schools could find search new sponsors or shut down. LEAD closed its doors. Charter School of the Dunes, in the midst of its new construction, found a new sponsor.

This so-called “charter shopping” raised some eyebrows and split the charter community.

In an Aug. 12 letter in the Indianapolis Star, David Harris, the CEO of Mind Trust, a not-for-profit education reform group, criticized a 2011 state law that expanded charter authorizers to include private colleges and universities, like Calumet College of St. Joseph that opted to sponsor the Charter School of the Dunes. Trine University agreed to sponsor the Timothy L. Johnson Academy in Fort Wayne, a school that also lost its charter.

Harris says some of those new authorizers aren’t “upholding the high standards that should be expected for charters.”

This year, the General Assembly passed a new law that stipulates if a charter has been revoked, a proposal for a new charter must be approved by the State Board of Education before a different authorizer awards a charter.

“But there is nothing to prevent a charter authorizer from approving a new school that is bad,” Harris wrote.

He wants the General Assembly to reconsider its 2011 law that expanded charter authorization.

Teasley calls it a “crossroads” moment.

“There’s a paternalistic view some have that we don’t have to have just choice — we have to have the right choice,” said Teasley.

He supported the schools finding new authorizers. “It’s clear they understand the challenges to take on a school slated to close by another authorizer.”

Calumet College President Daniel Lowery said his staff held several discussions internally about taking on a charter school sponsorship, as well as talks with the state.

Lowery said his staff looked for signs of improvement and a strong leadership team and found them in Charter School of the Dunes.

“I had mixed feelings about charter schools,” said Lowery. “Yes, they take money away but how do you tell a parent, ‘Don’t worry, in six or seven years we’ll have it figured out.’?”