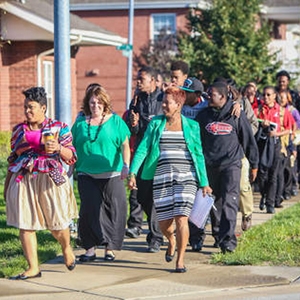 Seniors led the way Wednesday morning as students and teachers from the 21st Century Charter High School strolled two blocks from their old school and into their new $6.5 million school at 724 Washington St.

Principal Angela West jokingly called the walk their “March on Washington,” referring to the downtown street where both schools are located.

For now, students will occupy just the first floor at the new building, while construction continues for two to three more weeks on the second floor. The school was supposed to open Aug. 16, but problems with the removal of debris caused a delay.

In their first glimpse of their school, students saw lockers and floors adorned in their maroon-and-black school colors.

Once the students found their classroom, they got right down to business.

Students found their desks and less than a minute later, English teacher Von Smalley launched into their assignment: write an essay for a college application. “You come in with an essay that goes with the application and you will get graded,” he told them.

Students who weren’t planning on attending college could do an essay on the epic poem, “Beowulf.”

One student jokingly attempted a walkout with little success. “Nobody followed me,” he said as he returned to his desk.

West said the new school will be home to 253 students in grades 7-12. She said the school is no longer accepting applications.

In the evening, it will be occupied by 288 students who attend the Gary Middle College, a dropout recovery school. Both schools are operated by the Indianapolis-based GEO Foundation. The original school building, at 556 Washington St., will remain an elementary school,with about 420 students.

Because all the students are on the first floor of the new school, all 43 freshmen are based in the board room until the second floor is completed.

“We’ve come a long way,” said West. “This has been wonderful to bring the senior class all here.”

For the first time, seniors will be able to graduate in their own school; commencement is planned for the gymnasium.

The school provides free dual credit opportunities for courses with Ivy Tech Northwest. West said three seniors were on track to receive their associate degrees in the spring and two students should receive certificates.

Senior Nyesha Canady, 16, expects to receive an associate’s degree in general studies. From there, she’ll attend Ball State University and major in actuarial science. She didn’t receive her orientation yet, but she liked her new school.

“It’s beautiful. I love the hallways. It looks like a real actual high school.”