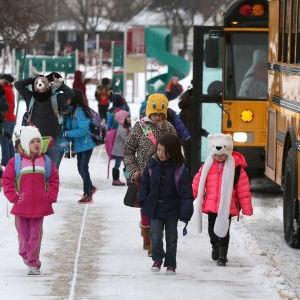 School districts in Northwest Indiana and across the state that closed school Monday and Tuesday because of the deep freeze won’t have to make up those days. Most schools expected to open for class Thursday.

Every school in Lake and Porter counties, with the exception of the School Town of Munster, remained closed Wednesday.

The Indiana Department of Education will grant waivers for schools that canceled classes Monday and Tuesday, IDOE spokesman Daniel Altman said. According to a message from the superintendent to school districts, the waiver applies only to those two days right now, and the districts will have to apply for the waiver.

Munster Superintendent Richard Sopko said he already has submitted the paperwork for the waiver. He said the district chose to open Wednesday after meeting with administrators and police officials Tuesday. He said they determined the streets were clean and safe and the parking lots and sidewalks were clean.

“The wind chill factor was down, and we believed we could successfully get our students to and from school,” he said.

In addition, two water pipes burst at Eads Elementary School causing an extensive amount of flooding in the building. School personnel worked with an outside contractor to extract the water, Sopko said.

“We have some extra classrooms in that building,” he said. “We were fortunate the town and our people did such a good job. We’re just happy the kids were able to get back to school safely Wednesday.”

Munster parent Maureen Gaither said her kids were getting stir crazy at home.

“I was out Tuesday and the roads were fine,” she said. “We’re in a small town, and they are good about plowing the streets. It was an easy back-and-forth. The line getting into the middle school this morning was long, but it’s always like that.”

Gaither is part of a carpool and she dropped off six children, including two of her own, at the middle school. She took three to Eads Elementary, including her second-grader.

“I was comfortable taking my kids back to school. It was time for them to go back,” Gaither said.

Hebron Superintendent George Letz said they will send in the waiver form and wait to see what the state department says about schools being closed on Wednesday. He said they have three “built-in days” in the calendar to make up for canceled days.

“We believe making up canceled days at the end of the year is not the appropriate time for good instruction in the classroom, so for many years we made up our canceled days during the calendar year,” he said. “If we don’t need these days they become extended weekend days for our students and parents since all these dates fall on a Friday.”

Kevin Teasley, founder and president of Indianapolis-based GEO Foundation, which operates 21st Century Charter School and Gary Middle College, said even though school was not in session, several students at 21st Century came to school. The students were using the extra time to study for the End-of-Course assessment retest scheduled for next week. About nine students showed up for the extra study time.

Lake Ridge Schools Superintendent Sharon Johnson-Shirley said the district closed Wednesday because she didn’t want students standing outside waiting for buses in areas where there was no sidewalk, and some students walked in snow-packed streets.

“The streets were slick and snow-covered,” she said. “It just wasn’t conducive to our students and teachers getting in safely. We expect to be back in school Thursday.”