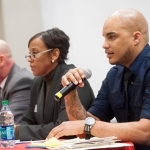 Green, a student at Gary Middle College, was one of half a dozen panelists who participated in a public forum at Indiana University Northwest focusing on the school-to-prison pipeline and its effect on black youths in Northwest Indiana.

Green told the audience he is black and Puerto Rican and grew up in a Polish neighborhood in Illinois. He said he got into a fight as a sixth-grader when another student called him the “N word.” He said was suspended for 10 days.

“I had ADHD, and I was labeled a troublemaker,” he said. “Nothing happened to the other student. It sparked hatred in me for others. I got to the point where I didn’t care. Four out of five teachers didn’t take any time with me. It was my English teacher who took time with me. She talked to me, and she sparked an interest in English and poetry in me.”

Still, Green became involved in drugs and got into trouble. He said he spent three years in prison and lost his wife and family. He said it wasn’t until he was sitting in prison and began taking classes that he decided to turn his life around.

Joann Price, a public defense attorney at the Lake County Juvenile Justice Center and a Lake County coordinator of the Juvenile Detention Alternatives Initiative, said youths are not confined to the juvenile justice system just to punish them but to protect them if they are a flight risk or a danger to themselves.

“We try to help them so they don’t reoffend,” she said. “We try to identify needs and provide services.”

Pruitt said it is critical to develop a relationship with students and focus on literacy and critical-thinking skills. After hearing from Stefaniak that the juvenile court system has a $66 million annual budget, Pruitt said the district could use some of that money to educate students rather than later dealing with the consequences of poor choices and behavior.

Carter touched on the people who are prosecuted through the court system, and one woman who he dealt with who had 16 children, all of whom had been taken away. He talked about the cost to society and irresponsible reproduction.

Stefaniak drew the ire of the crowd when he suggested a voluntary sterilization program for men and women.

“That’s like what the Nazis did in the 1930s when they introduced a massive, compulsory sterilization of a large segment of the German population,” Williby said. “I don’t think human rights should be compromised.”