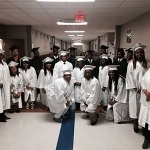 On the evening of January 28th, a crowd filed into the 21st Century Charter School @ Gary gym for the mid-year Gary Middle College graduation. They were greeted at the door by programs for the event by members of the SAAB/B2B chapter at GMC (Students African-American Brotherhood/Brothers 2 Brothers), who had donned black and white suits for the occasion to match the alternating black and white robes of the graduates.

As the ceremony began, GMC teachers paraded to the front of the assembly, wearing black robes, caps, and colorful sashes, smiling in anticipation of the group of 23 GMC high school graduates who followed them, each adorned in their choice of black or white robe and cap.

The crowd rose for the National Anthem, and GMC Principal Tim Pivarnik delivered a few words of welcome. Looking out before me, Mr. Pivarnik noted, are high school graduates representative of classes from 2014, to 1973. Mr. Pivarnik congratulated the graduates of their accomplishments, and presented the keynote speaker of the event, Karen Freeman-Wilson, the Mayor of Gary. A hearty round of applause filled the room, before a hush descended on the crowd, and smartphones were pulled out and held by steady hands to document the speech by video.

I want to thank the GEO family and the GMC family for creating a program that has done so much for so many, Ms. Freeman-Wilson started. Gary Middle College is an alternative charter high school program, which offers a second chance for people of any age to come back to high school and finish their diploma free of charge. Students use an online computer program, called Odyssey, to move at their own pace through the classes they need to earn a complete high school diploma.

Ms. Freeman-Wilson spoke of the challenges overcome by the graduates seated before her, and of the city of Gary, remarking, I see an area that offers challenges, but also presents opportunities. I see students who serve as role models to children, to parents who people look up to. I see citizens who will volunteer, I see folks who will help to improve the city of Gary. I see people who understand the meaning of perseverance, of never giving up who see that when the going gets tough, the tough get going. But it doesnt matter what I see it matters what you see when you look in the mirror. I am excited to see all that you will do. I am excited for you, because I know the future of Gary depends on you to succeed.

After the Mayor took her seat, graduate Alexis Turner rose and said a few words of thanks and congratulations to her teachers and classmates, admitting to her teachers, If it wasnt for you, I wouldnt be here.

The presentation of diplomas commenced. Principal Pivarnik announced each name, and each was met with thunderous applause, cheers, and stomping from the audience. As they walked across the stage, graduates were presented with their diploma, along with a red rose, and shook the hands of Mr. Pivarnik, Ms. Freeman-Wilson, and President and Vice President of the GEO Foundation, Kevin Teasley and Dana Johnson Teasley.

Once the graduates had returned to their seats, Tim Pivarnik led the tassel ceremony, presenting the mid-year graduate class of 2014, amid smiles and shouts, and waving of diplomas. Recent graduate Edna Anderson, who dropped out of high school more than 40 years ago, grinned and raised her hands in the air with joy. Congratulations to the recent graduates of Gary Middle College!