Menu
HOME  /  About Us  /  Media Center  /  Latest News  /  GEO in the News  /  Gary’s Charters Still a Strong Choice, Despite Challenges 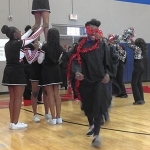 Cozell and Damon Thomas sat on the bleachers in the 21st Century Charter School gym and joined the sea of applause for the school’s 31 graduating seniors, including their daughter Devan. The Gary school called the May 14 event “signing day.” It’s a celebration because all 31 seniors in the Class of 2015 have been accepted to college, many with dual credits.

The kids wore black commencement gowns with the Tshirt of their chosen college underneath. As their name was called, they strolled or danced through a balloon archway and revealed their selection. Outside the school, located on a blight ravaged downtown street, signs of congratulations for each senior lined the walkway. Devan Thomas, 18, will graduate June 6 and enter Purdue University Calumet in the fall as a junior. While at 21st Century, the school paid her tuition at Ivy Tech Community College, and she earned an associate’s degree. “I don’t even know how to put it in words,” said Cozell Thomas of her daughter’s accomplishment. “I’m so very proud of her. She sacrificed a lot of weekends.”

The state established charter schools 13 years ago, in part, to provide alternatives like this in poor communities. Yet, data shows they struggle academically as much as their public school counterparts. An analysis last year by the Indianapolis Star, showed the failure rate for charters has more than doubled in the past five years. In all, 53 percent received a D or F last year, compared to 23 percent in 2010. Charters must make the grade under trying conditions and typically with less money. The clock starts ticking on a charter’s five year lifespan the day school opens. If the school’s performance flounders, it could lose its charter. Those factors have led to the shuffling of administrators, changing in education management operators and the wholesale elimination of some grade levels in Gary.

In 2014, four Gary charters posted D grades, while one — Charter School of the Dunes — received an F. In 2013, charter authorizer Ball State University revoked the Miller school’s charter. Calumet College of St. Joseph tossed the school a life line by taking over its charter, but dumped its founder and its principal. It also decided to close the high school. The school’s seniors who graduate Thursday will be its first and last.

Also in 2013, Ball State yanked the charter of Lead College Preparatory Academy. It decided to close. Meanwhile, Thea Bowman Leadership Academy survived a rocky year and received a one year provisional charter renewal from Ball State. Its first principal, Gwen Adell, resigned as chief administration officer, along with two principals. Thea Bowman interim president Ben Clement said the school is ending its relationship this month with American Quality Schools, an education management company. The Leona Group LLC is the school’s new education manager, he said. Former Gary Community School Corp. teacher and spokeswoman Sarita Stevens has been appointed as principal at the middle and high school. Clement said curriculum will be more robust and an additional Saturday program called Bowman University will offer dual credit classes and enrichment courses. “What happens is over time, you start to figure things out. You tweak the programs, we want to continue to improve,” he said.

Kevin Teasley, the founder and CEO of the GEO Foundation that operates 21st Century and the Gary Middle College, blamed his school’s D grade on what he called a “flawed” grading system. “Essentially, charter schools are set up to serve at risk students… We have kids coming in on a regular basis way below grade level.” Teasley said 21st Century’s academic growth has been steady, but only performance is measured. “Every year it gets better, I’m not happy we got a D. It’s the system we have to deal with. Lets do better.”

While charter schools have detractors, their biggest supporters hold seats in the GOP dominated General Assembly that’s pumping more money into the schools. This year, the General Assembly approved the Charter and Innovation Network School grant program that gives charters $500 in additional per pupil money if they’re high performing.

That means the school must receive an A, B, or C on the state’s grading system. Schools that receive D’s or F’s can also receive the money, if they are performing as well, or better than the nearest noncharter public school.

Additional legislation allows charters to receive loans from the Common School Fund for up to $5 million. On this signing day, Devan wore a black and gold Purdue Tshirt as she huddled with Ariel Craft, 18, who also received an Ivy Tech associate’s degree. She wore a purple and gold University of Northern Iowa Tshirt that gave her a full scholarship.

Cozell Thomas says she has no regrets about sending her daughter to 21st Century. “From day one, we knew about the dual credits,” she said of the Ivy Tech connection.

Charter School of the Dunes — F

Gary Middle College — no grade given