Having Twins at Age 16 Delayed Diploma, not Dream 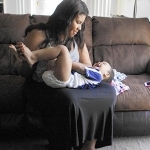 Only 19, Aliyah Richardson has always had an independent streak.On Saturday, she took the SAT exam, then put on a cap and gown for commencement exercises at the Gary Middle College. The Gary resident is now planning to leave home for college, along with her two children.

Three years ago, Richardson became pregnant from a casual relationship with a male no longer in her life. “I met someone through friends and it just kind of happened,” she said.

Before telling her mother, Richardson did research and made an appointment with the Christian-based Northwest Indiana Women’s Center in Highland. She put it off as long as she could because she wanted to continue going to school. By about five months, however, it was time. Richardson told her mother to meet her at the women’s center for her first ultrasound. Rochanna Richardson saw staff members fanning Aliyah, who almost fainted. “I was more in shock. I thought, ‘you just messed up, girl.’ I thought that wasn’t the plan,” Rochanna Richardson said. Aliyah nearly passed out when the ultrasound technician said she saw an extra foot.

“It was crazy, we saw the ultrasound and mom was crying,” said Aliyah Richardson. There were four feet because she was carrying two babies. While she wanted to stay at East Chicago Central High School where her mother taught, Richardson soon had to drop out because of the high-risk pregnancy. Healthy twins Jada and Jordan arrived Nov. 8, 2012. Richardson stayed home and breastfed them, missing her last two years of high school.

It’s not rare for teens to become pregnant while still in school, but statistics show such cases are on the decline. Teen moms typically face a difficult life of poverty, passed on to their children, statistics show.

In Lake County, the teen birth rate has dropped about 30 percent from 2009’s 24.6 per 1,000 females to 2012’s 17 per 1,000 females, according to data collected by Kids Count, a national effort conducted here by the Indiana Youth Institute. Its purpose is to assess the status of children and their families to develop policies to address their needs.

Bill Stanczykiewicz, Indiana Youth Institute president and CEO, says the rates are the lowest since they’ve been collecting data.

“Let’s not exhale, the work is never done. We need to continue to move that rate downward,” he said.

Stanczykiewicz said data shows that teen moms are much more likely to drop out of school. “That’s why teen pregnancy is such a challenging factor to help people stay out of poverty.”

There’s no clear cut answer for the decline. “With human behavior, there’s never one simple solution,” said Stanczykiewicz. “What kids need most is one consistent message from all the adults in their lives, whether it’s school, home or church. Even then, there’s never a 100 percent guarantee.”

Despite the opportunity to live with her mother, Aliyah Richardson got her own place in Gary where she’s raising Jada and Jordan. She decided to finish her high school education at Gary Middle College because it provided free child care.

She’s applying for college now with the goal of becoming a registered nurse.

“I’m going to go to college with the babies,” she said.

“I’m so used to relying on everybody in my house. I’m trying to wean off my mom.”

Picking up her high school diploma is a major milestone.